This browser is not actively supported anymore. For the best passle experience, we strongly recommend you upgrade your browser.
viewpoints
Welcome to Reed Smith's viewpoints — timely commentary from our lawyers on topics relevant to your business and wider industry. Browse to see the latest news and subscribe to receive updates on topics that matter to you, directly to your mailbox.
All Posts Subscribe
May 12, 2021 | less than a minute read

Ultrasound organizations rally to support use of ultrasound contrast agents

Following a recent warning from the US Food and Drug Administration (FDA) on the safety of certain ultrasound contrast agents (UCAs) containing polyethylene glycol (PEG), the American Institute of Ultrasound in Medicine (AIUM) joins the International Contrast Ultrasound Society (ICUS) in issuing a statement to reassure physicians and their patients that ultrasound contrast agents remain safe and beneficial for most patients.

Earlier, the FDA issued a notice that ultrasound contrast agents should not be administered to patients with known or suspected allergies to PEG. The FDA had become aware of immediate hypersensitivity reactions, including 11 cases of anaphylaxis and two deaths resulting from administration of those contrast media to patients with a reported history of PEG allergy.

The AIUM acknowledged the importance of the efforts by the FDA to communicate the potential risk of administering ultrasound contrast agents in patients who are sensitive to PEG, along with the modifications to product labeling. The statement from AIUM notes that reactions to PEG, although extremely rare, need to be considered alongside the clear benefits of contrast-enhanced ultrasound.

Because the risk of severe allergic reactions to UCAs remains extremely low, and they provide very substantial benefits to our patients, we do not recommend any changes to clinical policy regarding indications for their use. The new labeling highlights a concern that was already implied in the original labeling and is based on data obtained over a decade with no new or changed data. The use of UCAs should continue in appropriate clinical situations under supervision with the addition of specifically asking thepatient if they have a PEG allergy. 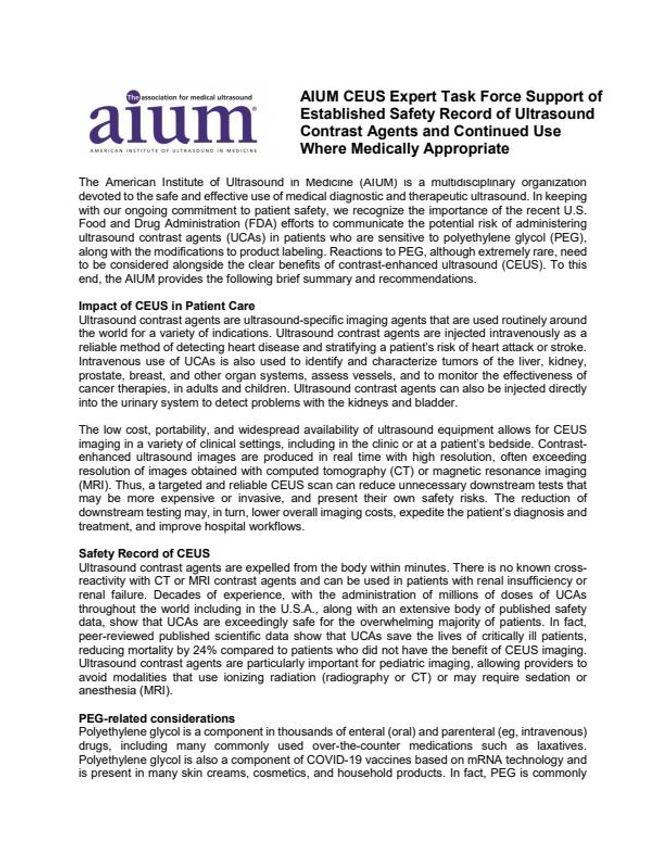