The Centers for Medicare & Medicaid Services has announced that it proposes to delay the start date of a new Radiation Oncology (RO) innovation model (RO Model) that would be in effect today had Congress not acted twice to delay its implementation. The RO Model would test prospective site-neutral, episode-based payments to Medicare reimbursement for radiotherapy (RT) care on an episode of care basis to hospital outpatient departments, physician group practices, and freestanding radiation therapy centers.  CMS has hoped that the RO Model could reduce Medicare expenditures for RT services while preserving or enhancing the quality of care for Medicare beneficiaries.

Stakeholders in the radiation oncology provider community have expressed concerns that the model did not strike the right balance between offering incentives to providers to participate and the anticipated reductions in payment rates for radiation oncology services. As the model developed, RO participants and stakeholders requested changes to the RO Model’s payment methodology and to other aspects of the RO Model design and participation requirements, but many stakeholders believed the concerns and recommendations were never adequately incorporated into the RO Model.

In announcing the delay, CMS acknowledged that some stakeholders will not support the RO Model test moving forward with unchanged discounts. CMS further acknowledges that many stakeholders oppose any increase in the geographic scope of the current Model.

Because of the ongoing uncertainty over the RO model, CMS is proposing to amend the rule to establish that the start and end dates for the RO model will come only through future rulemaking, which CMS announces will also involve modifications to the model design.

There is a substantial cost to continue funding preparation for implementation of the RO Model in 2023. 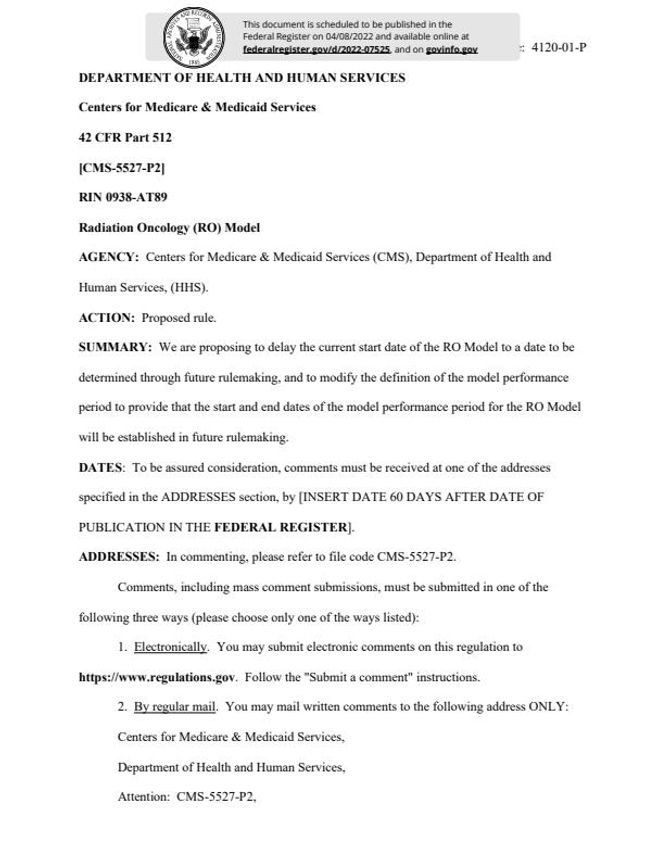