This browser is not actively supported anymore. For the best passle experience, we strongly recommend you upgrade your browser.
viewpoints
Welcome to Reed Smith's viewpoints — timely commentary from our lawyers on topics relevant to your business and wider industry. Browse to see the latest news and subscribe to receive updates on topics that matter to you, directly to your mailbox.
All Posts Subscribe
May 6, 2022 | 2 minutes read

Last month, GE Healthcare issued an alert to its customers that due to a supply chain issue in Shanghai, China, its iodinated contrast agent used to enhance many CT scans, Omnipaque, is in scarce supply. GE's production facility there is shut down during the COVID-19 lockdown in that city. GE said it expected the shortage to be in effect for at least the next two months, until the end of June. The shortage will threaten the ability of many hospitals and imaging centers to perform medically necessary CT with contrast studies.

The Committee on Drugs and Contrast Media of the American College of Radiology (ACR) has issued a statement that recommends considerations for imaging facilities operating during this time of iodinated contrast media shortage. The committee recommends that facilities attempt to utilize alternative studies to answer the clinical question such as non-contrast CT, MR with or without gadolinium-based contrast media, ultrasound with or without ultrasound contrast agents, nuclear medicine, or PET/CT, when feasible.

As facilities look for alternatives to CT contrast studies, they need to be mindful of Medicare's rules which require that, in a non-hospital setting, only the patient's treating physician can order diagnostic tests. The ordering test rule does offer the "test design" exception that allows radiologists to design a test by modifying the use or non-use of contrast media, but only in the circumstance when the order did not specify the use of contrast. The ordering test rule states generally that when interpreting physicians believe alternative tests are necessary, they must contact the ordering physician to obtain a revised order.

The ACR committee also recommends that facilities look for “generic” versions of contrast agent and, if possible, source contrast from other vendors.

The most discussed recommendation from the the committee states that if the facility has current access to higher volume single-use vials, it should contact its institutional pharmacy to determine if it is possible to repackage those vials in smaller aliquots to reduce waste at the institution level. For example, It is not uncommon for as much as 25% of contrast contained in a single dose container to be discarded. If the residual contrast is preserved and not discarded during the shortage period, while steps are taken to safeguard against contamination of the residual contrast, the facility would have another previously untapped source of contrast media.

To date, the US Food & Drug Administration has provided no guidance on the contrast shortage or its willingness to allow facilities to use, rather than discard, residual contrast from single dose containers.

The ACR notes that this is a rapidly evolving situation, and they advise that its guidance may be revised as circumstances continue to change.

GE has indicated that the delay will result in an 80% reduction in supply availability for 6 to 8 weeks. 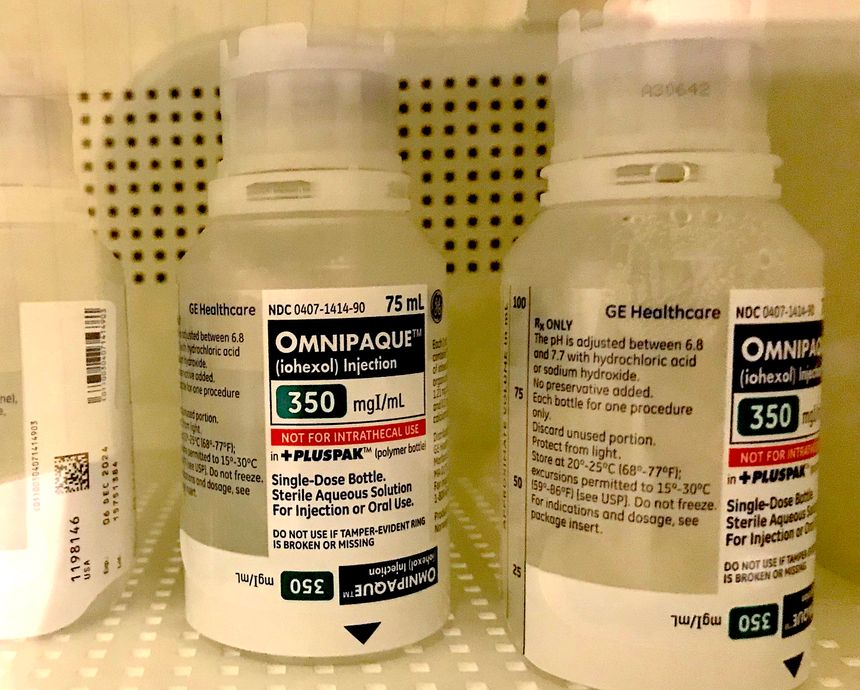