This browser is not actively supported anymore. For the best passle experience, we strongly recommend you upgrade your browser.
viewpoints
Welcome to Reed Smith's viewpoints — timely commentary from our lawyers on topics relevant to your business and wider industry. Browse to see the latest news and subscribe to receive updates on topics that matter to you, directly to your mailbox.
All Posts Subscribe
August 25, 2022 | 2 minutes read

In new article just published by the Journal of the American College of Radiology, a research team from the Harvey L. Neiman Health Policy Institute follows up on its earlier review of Medicare data from 2017 to 2019 where they measured the extent of utilization of non-physician practitioners (NPPs) - specifically nurse practitioners (NPs) and physician assistants (PAs) - employed by US radiology practices. (Our write up of the earlier report can be read here.)

In their new report, the authors further mine Medicare data, this time to review the type of professional services performed for Medicare beneficiaries that resulted in remittances for Medicare payment submitted by claims-submitting nurse practitioners and physician assistants employed by radiologists.

The researchers categorized Medicare services billed by NPPs as follows:

For each NPP, wRVUs for the three tracked categories were aggregated to compute the percentage of total clinical work effort attributable to each service category. Increases were seen for procedures performed as well as for all imaging guided services. The number of NPPs performing E&M, invasive procedures, and imaging interpretation increased, and billing for those services all revealed increases from 2017 to 2019. Paracentesis and thoracentesis were the most frequently billed invasive procedures. Fluoroscopic swallowing and bone densitometry examinations were the most frequently billed non-invasive imaging services. By region, NPPs practicing as majority clinical E&M providers were most common in the Midwest and the South. The majority of NPPs performing radiology procedures were located in the South.

Clearly, both the utilization of NPPs and the billing of their services in growing. Since this study looks at trends by using Medicare data only through 2019, it will be important to continue to monitor their utilization by radiology groups in the years beyond 2019. Utilization of NPPs during the COVID-19 public health emergency undoubtedly will have had an impact, as well as changes in Medicare rulemaking.

One such rule change was the 2021 Medicare rule revision to permit NPPs (no longer just physicians) to provide direct supervision for Level 2 tests (e.g., MRIs or CTs with contrast) that require the proximity of being in the office suite and immediately available, but not in the room where the test is administered. NPPs are now permitted by the new rules to supervise these tests for Medicare patients if they are acting in accordance with their state scope of practice and other state laws. It will be helpful to learn how many radiology groups are relying on NPPs to now supervise Level 2 tests in the manner now approved by Medicare and permitted by some state laws, but not others.

The use of mid-level practitioners in radiology practices has both proponents and detractors. The authors cite this scope-of-practice controversy and the ongoing policy debate within the Council of the American College of Radiology. Nevertheless, with the current challenges of radiologist shortages, I believe we will see an ongoing growth in the use of NPPs by radiology practices. It will certainly be interesting to watch. 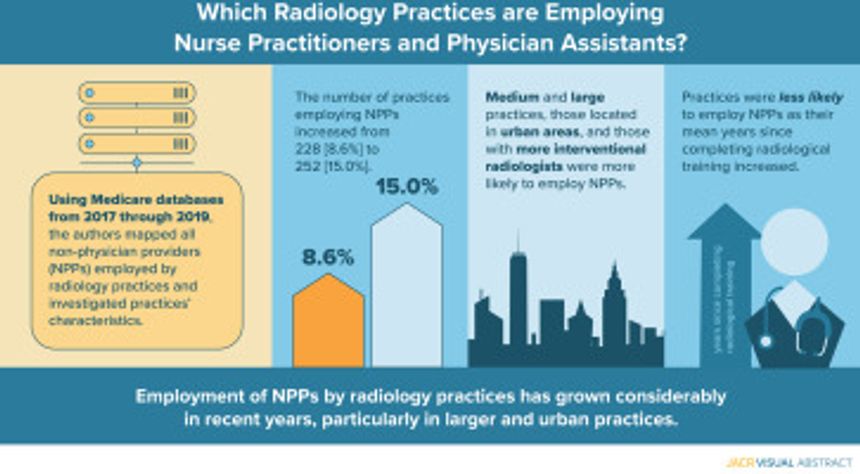