This browser is not actively supported anymore. For the best passle experience, we strongly recommend you upgrade your browser.
viewpoints
Welcome to Reed Smith's viewpoints — timely commentary from our lawyers on topics relevant to your business and wider industry. Browse to see the latest news and subscribe to receive updates on topics that matter to you, directly to your mailbox.
All Posts Subscribe
November 22, 2022 | less than a minute read

Singapore and South Korea are amongst Asia's most digitally connected nations. They have also inked the first digital partnership agreement between two Asian states.

It is also Singapore’s fourth such pact with other countries, following similar partnerships with Chile and New Zealand, as well as with Australia and Britain and it is anticipated that more will follow.

Also coming up, Singapore and South Korea have also concluded negotiations for two other memoranda of understanding – on artificial intelligence and the electronic exchange of data between Customs administrations – that will be signed later this year.

Mr Ahn said that Singapore and South Korea share a common experience of rapid economic development built on openness and innovation, and the latest partnership builds on their existing free trade agreement (FTA) – one of South Korea’s oldest FTAs. “The bilateral digital partnership agreement will be a basis for strengthening our close relationship and shaping, together, the rules of digital trade in the Asia-Pacific region,” he said. 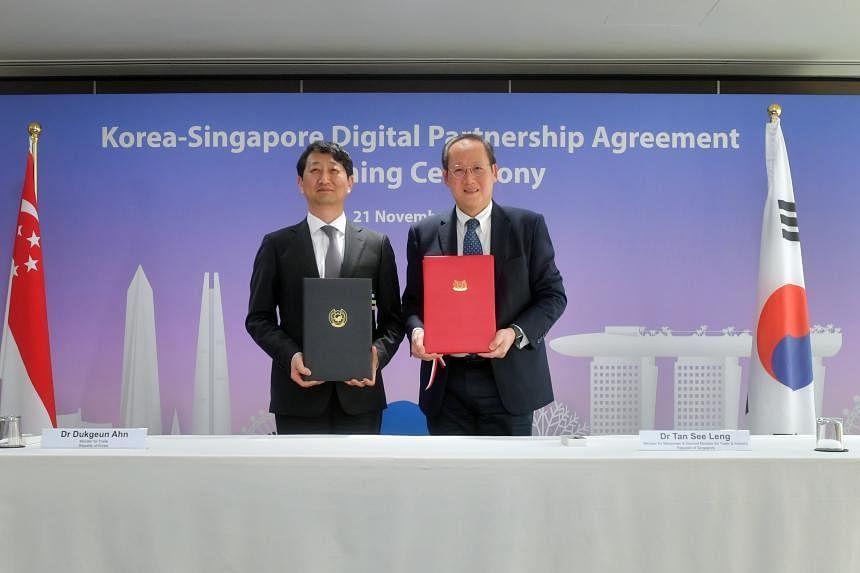